Welcome to the WFO blog!

Welcome to the WFO blog! We are pleased to introduce this new feature on our website, and even more pleased to announce that the blog is launched with Jérôme Guillet, formerly managing director of Green Giraffe, as a regular contributor.

As you know, the purpose of WFO is to promote offshore wind globally, and Jérôme has been actively involved in the development of the industry since 2004, first with Dexia, and then with Green Giraffe, helping to raise finance for multiple projects and regularly speaking publicly about the issues the industry faces.

In the context of the energy transition, with countries and major corporations both in the energy sector and outside looking to reach net-zero, offshore wind is increasingly seen as one of the ways to help meet these targets, and features more and more in public discourses and corporate plans. Quarterly results by quoted companies focused on the sector give investors and the wider public certain information but not always enough context to fully understand the wider picture. In fact, the increased scrutiny by the general public brings back old arguments (intermittency, impact on fauna, relationships with fishermen, localisation of jobs) that have been discussed over the past 15 year and which the industry may consider as “resolved” but which need to be explained in more detail again.

This blog will tackle such issues, and will discuss wider energy topics, including economics, policies, regulatory frameworks, but always from the perspective of how the offshore wind industry is impacted, or can play a role, or can be compared to other technologies.

Jérôme is the first contributor but the intent is to open the blog to other writers, on a regular or ad hoc basis, and we welcome expressions of interest to write contributions. This blog will also be a tool to present the various reports which WFO is regularly publishing and ongoing contributions on activities in the existing committees on floating offshore wind and dispute resolution.

An introduction post by Jérôme is posted together with this overview. We welcome your ideas and suggestions to make this blog as useful and lively as possible!

I’m very pleased to have been invited by WFO to get this blog started and I intend to make this a place for useful information and analysis around offshore wind and related wider energy issues.

To give a bit more context to my forthcoming articles, I thought I’d give some background on what brought me here, to explain both my involvement in offshore wind over the past 15+ years and my history of writing about offshore wind, energy policy and associated topics.

It all started in 1992, when I was invited to write my PhD dissertation on Ukraine, then a brand new country on the map of Europe. After various bits of research on money (the country was trying to get rid of the Soviet ruble and introduce its own currency), trade flows (how do you organise your trade when your industry is fully integrated with Russia’s through the Soviet gosplan), I eventually landed on the gas pipeline topic. As a way to actually spend time in the country, I found an internship with Gaz de France (now part of engie): they had opened a representative office in Kiev to keep an eye on the pipelines that were transporting the natural gas bought under long term contracts with Gazprom – previously a Soviet entity and now a Russian one only. I ended up studying in detail the Ukrainian gas pipeline network, and how it could be used as a weapon by the country to protect (or not) its fledging new independence. 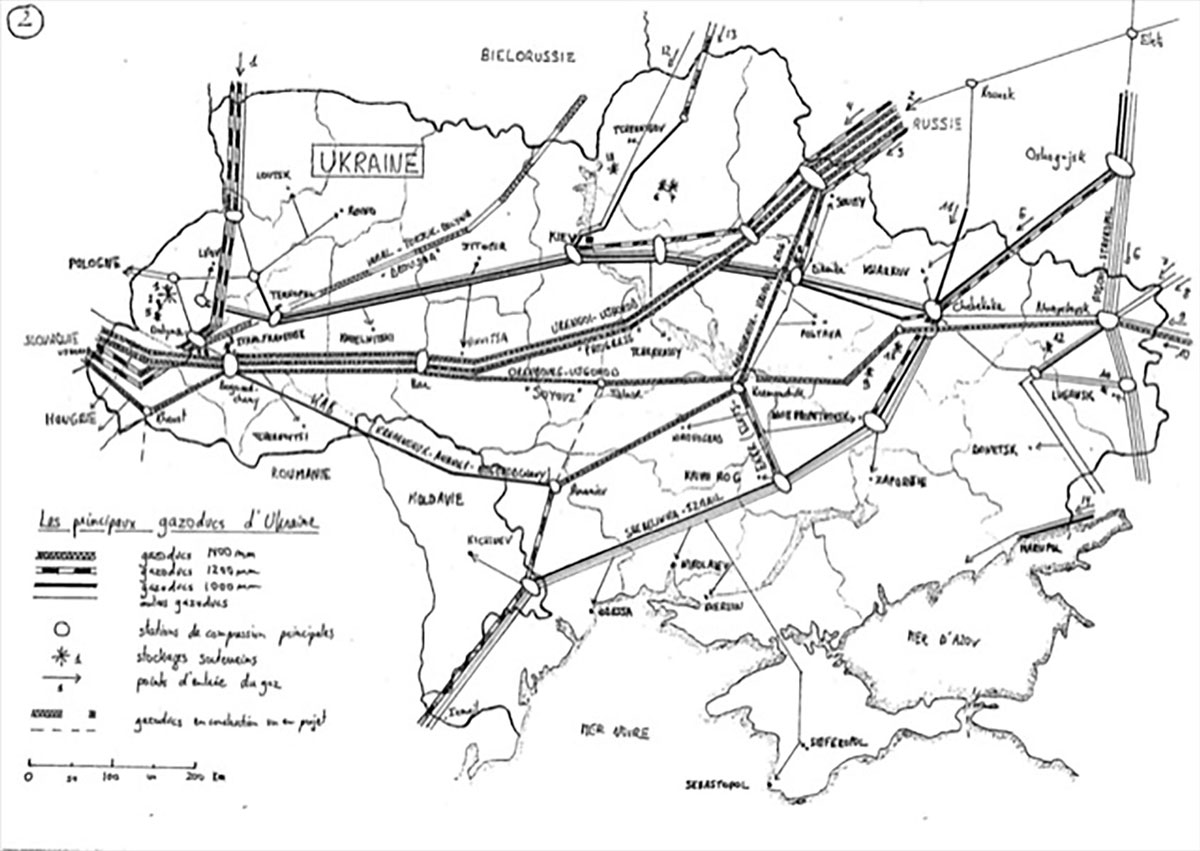 If this sounds topical today as we are witnessing the invasion of the country by Russia, it certainly is, and I will definitely come back to it, as it is very difficult to discuss policy for renewable energy in Europe without addressing natural gas and associated strategic issues like Russia. I wrote a first article about this topic: Some background stories on Ukrainian gas pipelines.

This did not bring me right away to offshore wind, but it did get me hired in the energy project finance team of Crédit Lyonnais in 1996, as they were looking to expand that business with the new oil & gas companies of the former Soviet Union – Gazprom, Lukoil, but also pipelines from the Caspian Sea. Oil & gas project finance is very much about political risk, and the former Soviet Union in the 90s was a great place to learn about risk – and possible mitigants, and to realize that energy is almost always political, definitely always strategic, and yet easily misunderstood.

I worked there for 5 years and then moved to Dexia to help them develop their own energy project finance activities. Initially the idea was to continue to focus on oil&gas as well as power (which at the time mostly meant coal- and gas-fired plants) but a few early wind transactions caught our eye and I was asked to prepare a strategy to develop the wind finance business. It was prepared and approved, and I closed my first wind financing in 2002 (and I will readily confess that I had not even heard of the sector before that date). Dexia was then able to take a leading position in wind finance (as well as solar), as it was still a relatively exotic activity and the leading project finance banks were not yet active in the sector. That changed quickly, and in order to keep our lead, we started thinking about offshore and how to get a deal done in that sector. I started working on the financing of the Q7 project (now “Princes Amalia”) in the Netherlands in early 2005, and that project reached financial close in late 2006, the first ever non recourse debt construction financing for an offshore wind farm. Many other projects followed: C-Power phase 1 (BE) in 2007 and Belwind (BE) in 2009 (still with Dexia) and then, with Green Giraffe, which I helped found in 2010, C-Power (BE) in 2010, Meerwind (DE) in 2011 and many others.

In parallel to my day time banking job, I started writing actively about energy on the blogs of the time (in the early 2000s, before social networks, blogs were an exciting new medium and the place to be!) and contributed many articles (you can see a pretty comprehensive list here. Some seem to have aged well, such as this one: “Liberal markets create an addiction to gas” in the Financial Times. I started writing in reaction to behavior summarized by H.L. Mencken, a 19th century polemicist: “for every complex problem there is a solution which is clear, simple, and wrong” – the energy sector is definitely complex, but as it impacts everybody, the temptation to offer simplistic analyses and solutions is overwhelming and indeed dominates discourse, in particular by politicians. My articles wanted to explore some of the complexity and explain why the simple solutions are inapplicable, or wrong, because even when they are such things, they are hugely influential and do drive actual policy making to a large extent.

In recent years, I’ve mostly written about offshore wind, and many of my presentations, articles and, more recently, blog articles can be found on the Green Giraffe website.

I am no longer with Green Giraffe, but will continue to write about these topics here. From reading articles in the press, discussions with people outside the industry, and even people in charge of energy policy, it is clear that offshore wind is still poorly understood even when it is not willfully misrepresented (and it is often fascinating to understand why it can be misrepresented – the energy transition has some obvious winners and losers, and some which are less obvious but no less active in promoting their interests). It is thus worth bringing the perspective of an insider, and in particular someone with knowledge of how projects are financed, as this has a larger impact than many people realize.

While I have been in the industry for a long time, I continued to work on oil & gas projects until 2009 and believe that understanding the perspective of that side of the energy industry is essential, especially as oil majors are now actively investing in offshore wind – and we are grappling with dependency on oil & gas imports from countries with unsavory, or downright hostile, regimes. As a Frenchman, I’m also familiar with our nation’s very successful nuclear programme and its more recent challenges and I believe that the comparison – and competition – between nuclear and offshore wind is also a highly topic matter to explore.

I hope to provide food for thought through regular blog posts as well as longer reports which will also be published by WFO, and I look forward to the discussion these will hopefully generate – and to welcoming contributions by others to this blog on topics of relevance to the industry.

I’d like to thank again Gunnar and Martin for the invitation to do this blog, and invite you to read my first actual contribution shortly!

All of my articles here, as well as others that may be less directly relevant to WFO, will be posted on my Substack blog Jérôme à Paris where comments are allowed and I will welcome further discussion of all topics.